Putting Comfrey to Use and a Peek at the "Seed Garden"

I have a sort of love-hate relationship with Comfrey. I value it's healing properties and enjoy its beauty during the early part of summer when the huge plants are fresh and the bees are buzzing happily around the pretty purple flowers. But come mid-summer, the plants start to topple over onto whatever I was thoughtless enough to plant directly in front of them in the spring (when they looked so harmless!), they get powdery mildew, and are just plain unsightly! Besides that, the plant is virtually indestructible. The taproot can go down as far as 10 feet, and any stray piece of root will produce another huge plant in no time! 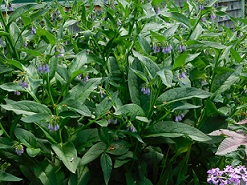 But it is because of this long taproot, which brings up nutrients from deep in the soil, that Comfrey is believed to be an excellent addition to compost. One source I found claims that Comfrey is actually higher in nitrogen and potassium than chicken manure! If true, this is good news to me since having to give away my flock a few years ago. However, I have also read that all this is a myth, so my hopes aren't too high yet. So I've decided to experiment! Yesterday, I cut it all down and decided to use it as a mulch, which I hope will break down and enrich the soil. Comfrey grows extremely fast so I should get one or two more cuttings at least before the summer is over! 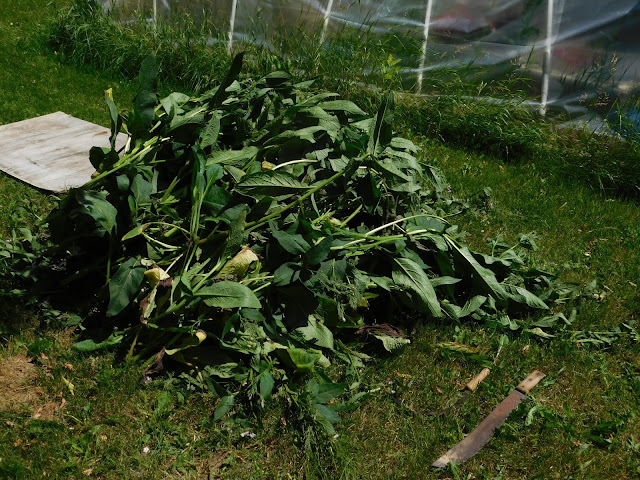 I chopped the leaves and stems to help it break down faster (not to mention making it easier to handle!). 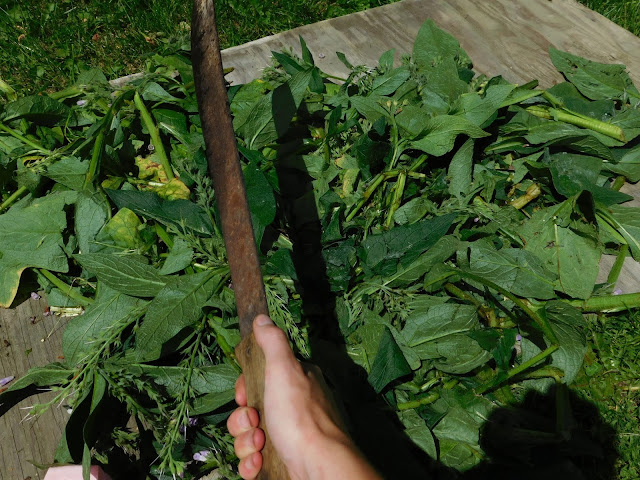 I'm also experimenting with Comfrey tea to use s a liquid fertilizer. For this, I used only the leaves, well chopped. This is supposed to sit for 5-6 weeks and then will be diluted 50:50. It had only been started about 24 hours before this picture was taken and as you can see the leaves are already starting to decompose. It smells nasty too! 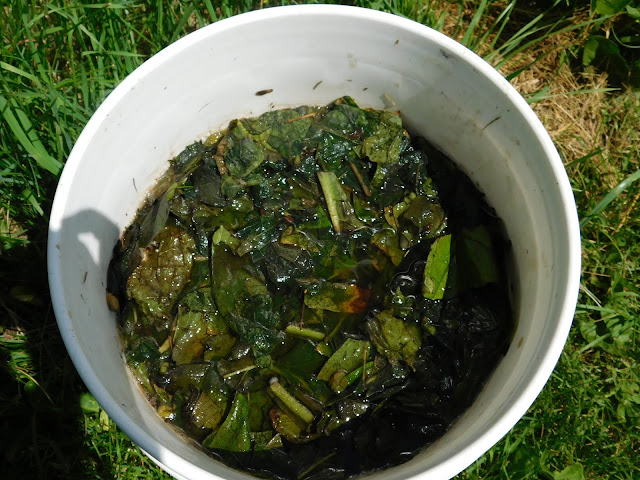 Well, I used most of the Comfrey mulch in my "seed garden", so I thought I'd show you all what's growing there, in hopes of making this post a little more enjoyable! 😊 This garden is still very much a work in progress and I haven't made nearly as much progress on it this year as I'd hoped. Only one half is planted and the other half is under tarps right now to keep down the weeds until I get it prepared for planting. 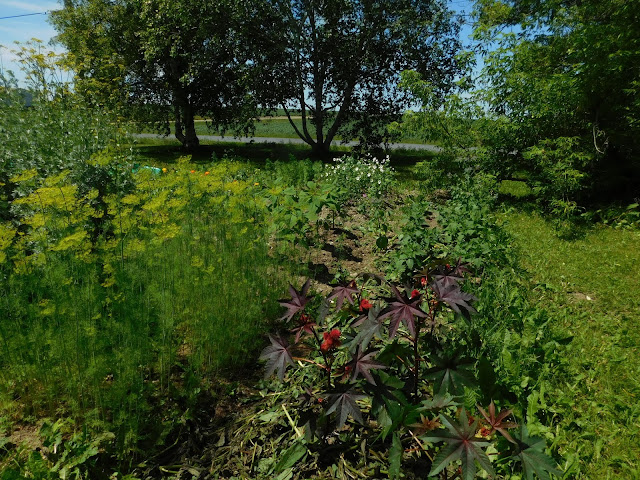 A view from the other side. The Lovage is at least 7 feet tall, maybe even higher! Next to it on the left is Wormwood, which is about as tall as I am, and then there's Dill which is all self-sown from last year's patch. 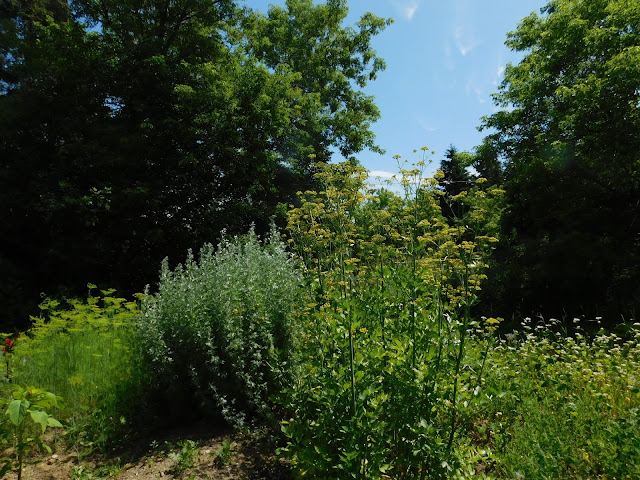 The Castor Beans got off to a slower start this year due to the chilly spring, but they are thriving now and I hope they'll manage to ripen seed again. 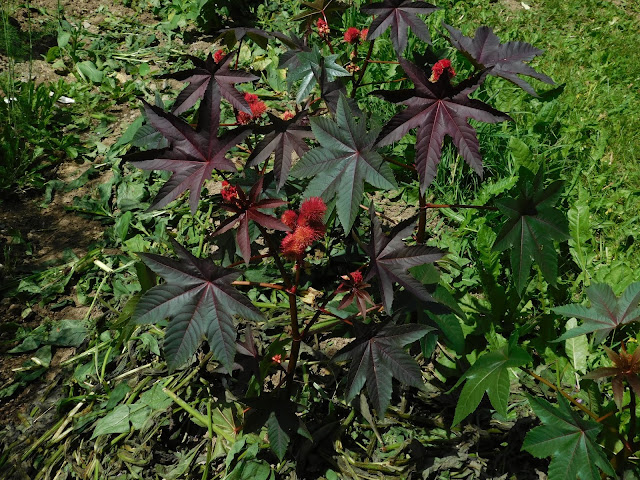 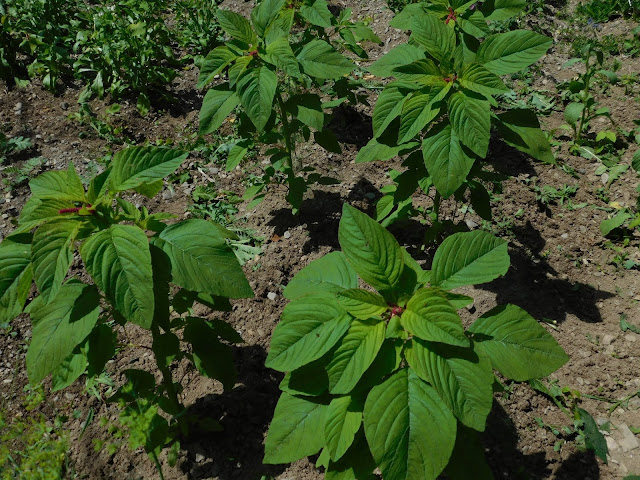 I'm getting a high percentage of white in my 'Old-fashioned Vining' Petunias this year for some reason. I'm rather puzzled about that as I've been getting a nice mix of colors the last 3 years since I've been saving them, and I saved seed from more than ever last year! 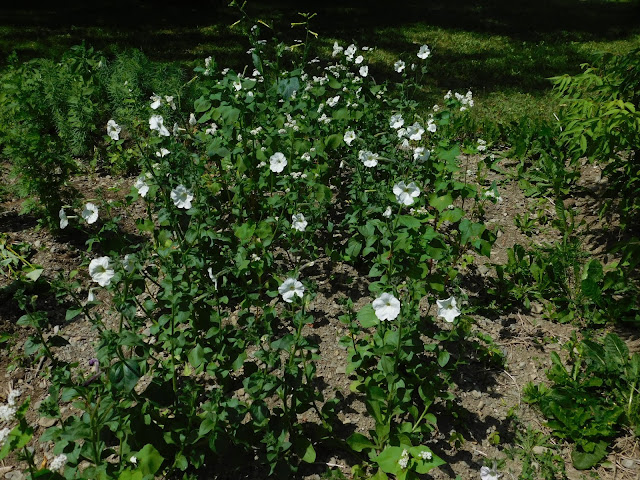 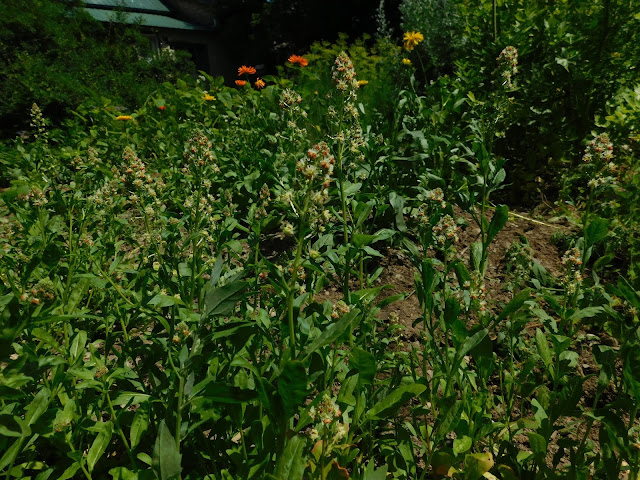 And finally, the 'Ball's Improved' Calendulas are starting to bloom and adding some bright color! 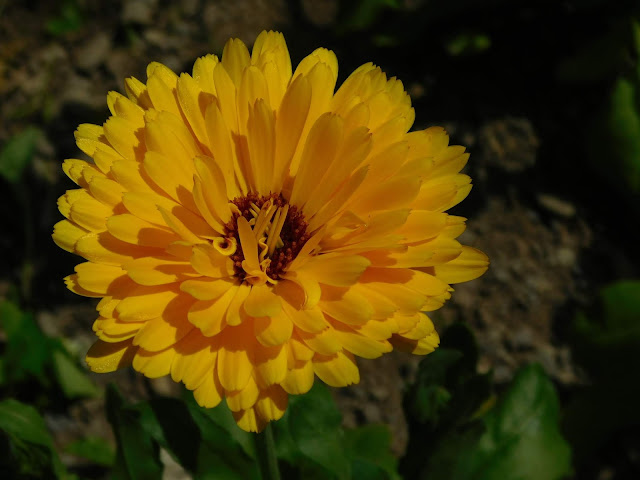 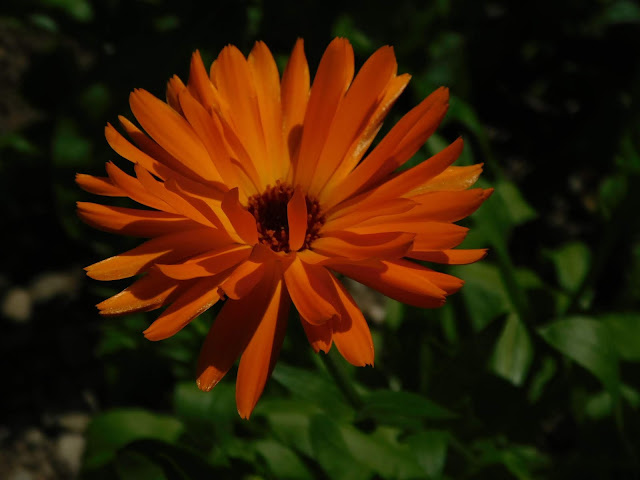 Email ThisBlogThis!Share to TwitterShare to FacebookShare to Pinterest
Labels: Herbs, My Garden 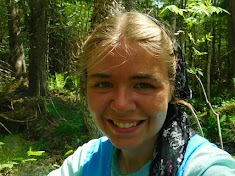