This is my second year offering heirloom, organically grown seeds from my garden, and I'm pleased to announce that I'll be offering many more flowers and herbs this year, including a few native wildflowers!
I cannot sell directly through my website, but if you fill out the Catalog Request form at the bottom of this page, I will be happy to send you my catalog and order form via snail mail. I can ship anywhere in the US.

All seeds are $2.50/pkt. unless otherwise noted. 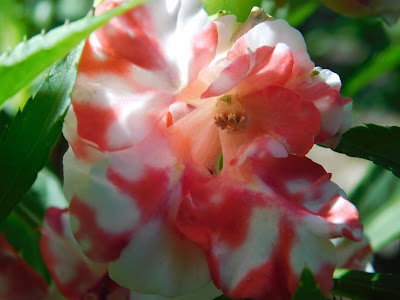 My favorite annual! Stunning, red and white mottled flowers on 2-foot plants bloom over a long season. A native of India, it has been cultivated since the 16th century and was very popular in Victorian gardens. A variety "with large double variegated scarlet and white flowers" is mentioned as early as 1807. Praised in The Gardener's Monthly (April 1863) as "unequaled among flowers". 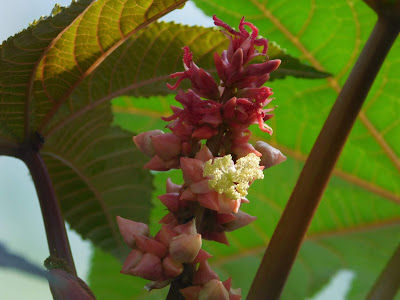 An exotic, fast-growing plant with palmate, bronze to deep green colored leaves and bright red, spiky seed pods. Native to India and East Africa, but has naturalized throughout the tropics. It persists as a shrub or small tree in frost-free areas but is easily grown as an annual in the North. Believed to be the "gourd" that shaded the prophet Jonah in the Bible! (Jonah 4:6-11)
'Impala' is a dwarf variety that only reaches 5-6 feet tall. Ideal for smaller gardens.

Caution: The seeds and plants are very poisonous. Keep away from children and pets. 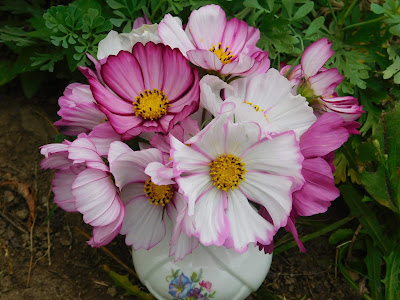 An easy-to-grow annual that actually prefers poor, dry soil! Native to Mexico. 'Picotee' starts blooming when the plants are only about 2 feet tall but will continue to grow until it eventually reaches 4-5 feet in height. The flowers are various shades of pink and white with darker edges. (There may be a few plants with solid colored flowers  as well). 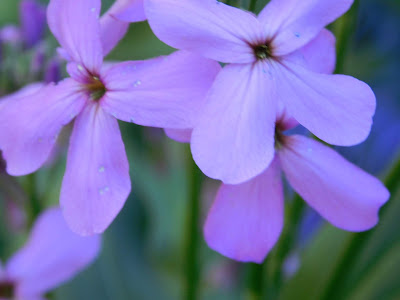 This charming late-spring bloomer goes by several names including Sweet Rocket, Vesper Flower, Mother-of-the-evening, Damask Violet, and Summer Lilac. It is native to Italy but has naturalized throughout eastern North America, from Newfoundland to Georgia, since its introduction in the 17th century. Lilac-purple flowers on 4-foot plants are fragrant at night. It self-sows very freely and is sometimes considered invasive, but may be enjoyed with safety if the old plants are cut back after flowering. Biennial. 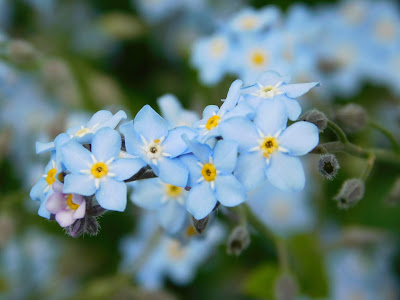 This little blue flower is so fragile in appearance and yet so hardy! Native to Europe. There are countless legends about this humble little flower and how it got its name. According to one German legend, a knight and his lady were walking along the banks of the Danube when she saw and admired the lovely flower growing at the water's edge. The knight gallantly went to pick it for her but was swept away by the current. He tossed the flowers to her on the bank, saying "Forget me not!".
Biennial. Plant anytime in summer for blooms the following spring. 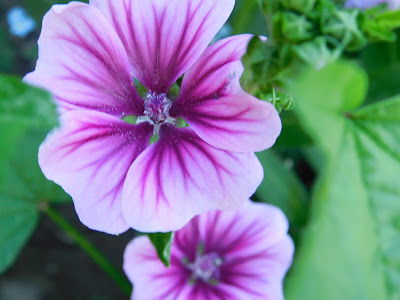 2-foot tall plants bloom profusely with small lavender flowers with darker purple stripes. Looks like a miniature Hollyhock, but will bloom the first year from seed. Grown by Thomas Jefferson in 1806.  A must in any historic garden! My original seed came from Monticello. Also called Cheeses Mallow because of the unusual shape of the seed clusters. Native to Europe and Asia. Annual. 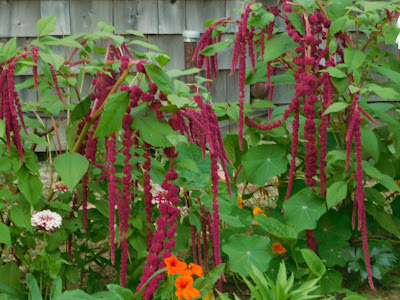 A striking and unusual plant with long, drooping red tassels. Plants reach about 3 feet tall and bloom July to frost in my garden. Makes a nice cut flower fresh or dried. The tiny seeds may be used as a grain and the leaves are also edible. Other common names include Tassel Flower, Velvet Flower, Flower Gentle, Nun's Whipping Rope, and Foxtail Amaranth! Native to South America.  Annual. 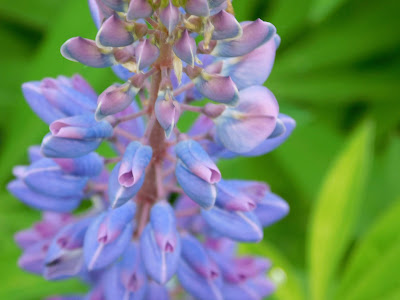 New England is famous for the wild Lupines that beautify our fields and roadsides each June, but they are actually not a native wildflower! The famous children's story of Miss Rumphius the Lupine Lady is actually based on a true story. Hilda Hamlin, the real Lupine Lady, started planting Lupine seeds imported from her native England, first around her cottage in Christmas Cove, Maine, and then along the roadsides on the way to town! Perhaps we have her to thank for the wonderful display each summer. She certainly did make our little corner of the world more beautiful!
I collected my original seed while kayaking along the Aroostook River. Blue and white flowers on 3-4 foot plants. Perennial. 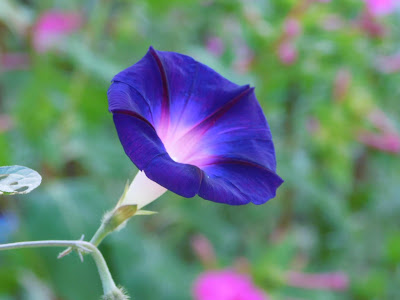 AKA as 'Kniola's Black Knight'. This stunning dark Morning Glory was discovered by Mr. Kniola on an abandoned Indiana farm. Dark purple, velvety flowers have a magenta star and white throat that sometimes appears to glow! Unlike most Morning Glories, this one starts blooming when still very small and still climbing! It eventually reaches about 8 feet in height. Annual. 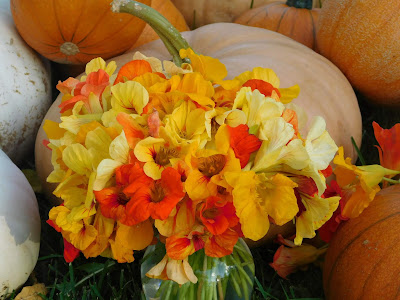 Red, orange, or yellow flowers, with some bi-colors. Plants can trail to 10 feet. I like to plant these between rows in my vegetable garden. By late summer, the ground is carpeted with masses of brightly colored blooms! Very easy to grow. It actually blooms best in poor soil and tolerates dry conditions. The leaves and flowers are edible and are often added to salads! Native to the Andes.  Annual. 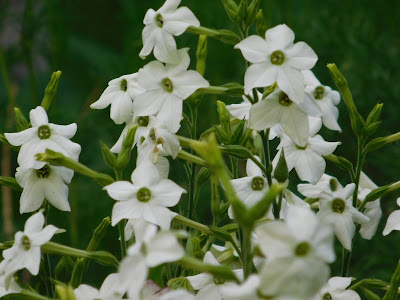 AKA Flowering or Jasmine Tobacco. This is certainly not the showiest flower in the garden, especially since the flowers tend to close on hot summer days, but it will delight you with its sweet perfume when evening comes!  A must for night gardens and would be wonderful planted under an open window, where it's fragrance can waft into the house. Native to South America. Annual. 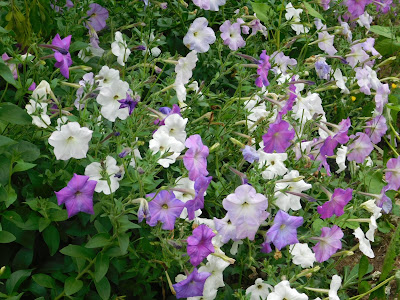 This lovely variety dates back to the early 1900s. It is ever-blooming and hardier than modern hybrids. Very fragrant flowers in shades of lavender, rose, and white. Plants trail to 3 feet. Native to South America. It is related to Nicotiana and has a similar fragrance. Annual. 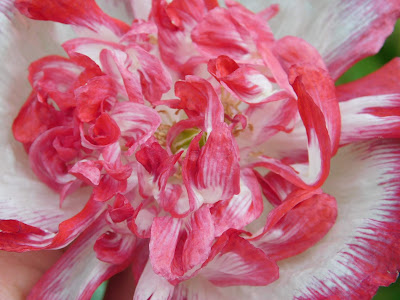 A beautiful "peony-flowered" type that blooms in varied shades of rose, striped with white. Plants grow about 3 feet tall. Resembles the poppies shown in illustrations from old herbals! The seeds are edible. Native to Southeastern Europe and Western Asia. Annual. 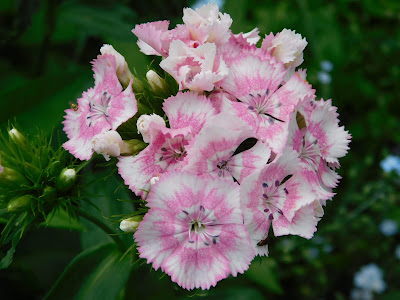 A wonderful old-fashioned favorite that blooms early summer the second year after planting. Red, pink, white, and bi-colored. Delicious spicy fragrance. Believed to have been cultivated by monks as early as the 12th century and was planted in the gardens of Henry VIII's palace in 1533. Native to the mountains of southern Europe. Biennial. 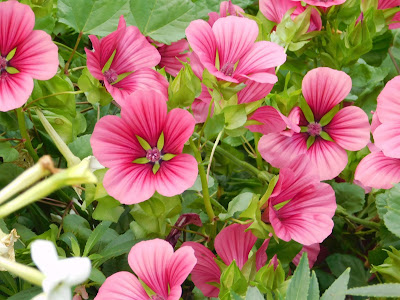 Here is a flower that is not often seen in gardens anymore! The large plants are about 3 feet tall and quite bushy. They bloom profusely with large pink or white flowers with darker stripes. Very easy to grow.  AKA Mallow Wort and Annual Malope. Native to the Mediterranean. Annual.

*Please note: All statements in these descriptions are for historical information only. Always consult a health professional before using herbs for medicinal purposes. 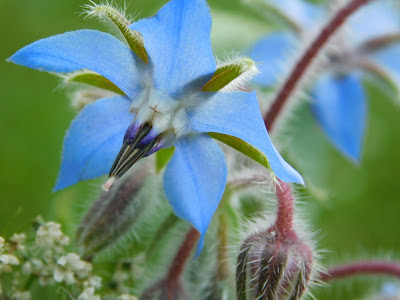 A popular herb with lovely sky blue flowers that sometimes start out pink! The young leaves and flowers taste like cucumber and are used in salads or as a garnish. Bees love it too! Native to the Mediterranean region, but has naturalized in many places throughout the world. Self-sows readily. Annual. 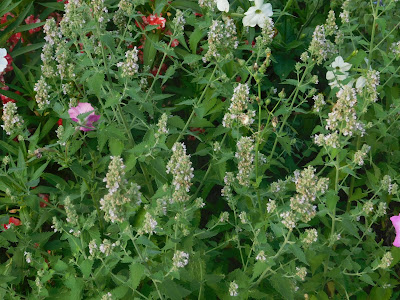 Famous for driving cats wild, although only about half the feline population is actually attracted to it. It is also popular in teas and is sometimes used to treat insomnia, anxiety, headaches, and colds. The flowers attract bees and butterflies. Bushy plants are about 3 feet in height. Native to Europe and Asia. Perennial in zones 3-9. 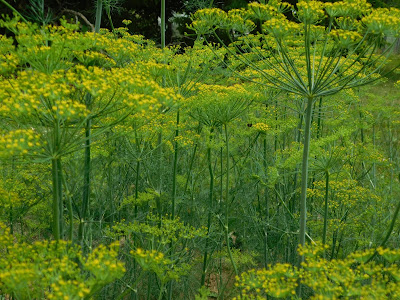 A familiar herb that has been in use since ancient times and is mentioned in the Bible (Matt. 23:23). Probably native to the Mediterranean region. 'Bouquet' is early to flower and excellent in pickles.  Grows to about 3 feet tall with large flower heads. Annual. 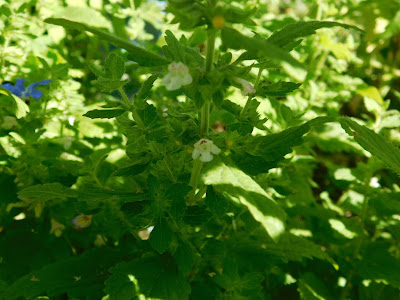 One of my favorites! The leaves have a delicious lemon fragrance when bruised. Many virtues have been attributed to this herb. In A Modern Herbal, Mrs. Grieve tells about a John Hussey of Sydenham, who breakfasted on Balm tea for fifty years, and lived to the ripe old age of 116! It is also a good plant for bees (the genus name Melissa is Greek for "honey bee"). The English botanist John Gerard (1545-1612) suggested rubbing the leaves on the beehives and claimed that it "causeth the bees to keep together, and causeth others to come with them". Native to southern Europe. Low-growing plants reach 12-18" tall. Perennial in zones 4-8. 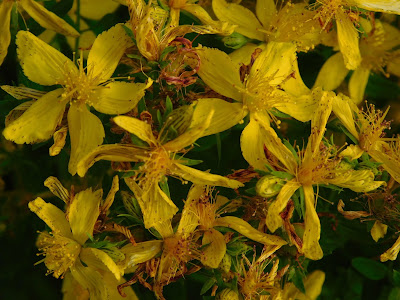 St. John's Wort is famous for its use in treating mild depression but has also been used infused in oil to treat wounds, sore muscles and nerve pain for centuries. There are many interesting legends and superstitions about this plant. The flower buds "bleed" when handled (this is caused by hypericin, the active medicinal ingredient), which may be why it came to be associated with St. John the Baptist. Another legend says that the plant grew at the foot of the Cross and caught Christ's precious blood as it fell so that none would be lost.
Native to Europe and Asia, but has naturalized in many places. Perennial in zones 3-8.
Caution: In large amounts, it can be toxic to livestock. 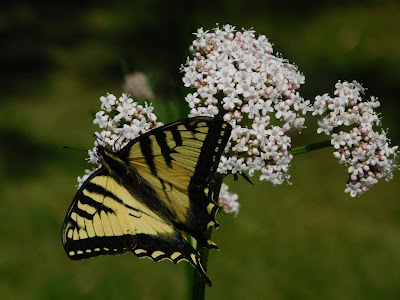 My favorite herb! Valerian has been used since the days of ancient Greece and Rome, when it was known as "Phu" (an expression of aversion, probably because of the strong smell of the roots, which is the part used medicinally). Used during both World Wars to calm the nerves of civilians during air raids. It is still in use today as a remedy for insomnia and anxiety. Low-growing plants send up 4 foot stems with pale pink buds opening to pure white flowers in early summer. Lovely in the flower garden! Also called Garden Heliotrope because of the flowers' delicious vanilla fragrance. Native to Europe and Asia but is naturalized in many places. Perennial in zones 4-8. 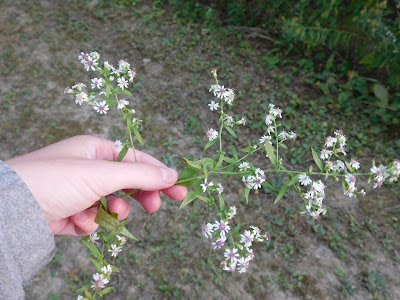 ​​
In my opinion, this is one of the loveliest of the Asters. The tiny flowers bloom along the stem, giving the whole plant a delicate, lacy appearance. AKA Starved Aster. Provides nice winter interest as well. Grows 1-3 ft. tall. Native to eastern North America. Perennial. 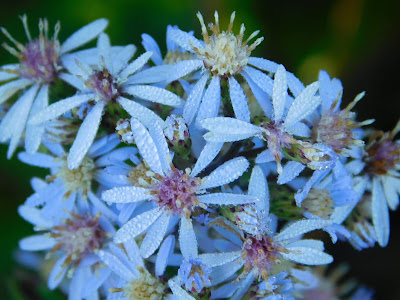 ​
A very pretty Aster that is quite common in fields and the edges of woods. Dense clusters of flowers in shades of purple to white. Heart-shaped leaves. AKA Blue Wood Aster.
Grows 1-4 ft. tall. Native to eastern North America. Perennial. 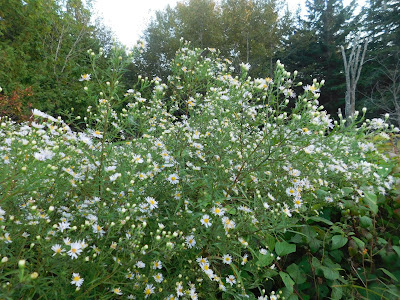 AKA Tall White Aster, Eastern Line Aster, Lance-leaf Aster, and Narrow-leaf Michaelmas Daisy.  Tall plants grow up to 5 feet. Native to Canada and the US. Perennial. 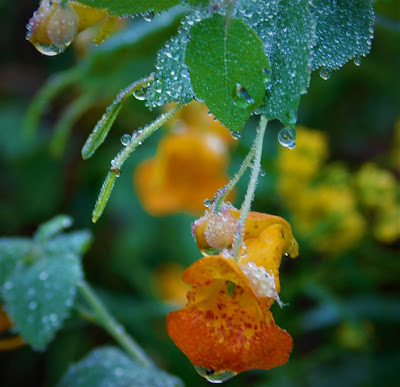 Common in wet areas such as woods, ditches, and along creeks. Jewelweed is quite popular as a remedy for poison ivy and other skin irritations. Children (and adults!) love the ripe seed pods which burst open at the slightest touch (hence the genus name, Impatiens). The species name capensis, means "Of the cape". It is so named because Dutch botanist Nicolaas Meerburgh mistakenly thought it was native to the Cape of Good Hope. AKA Touch-me-not and Orange Balsam. Grows 3-5 ft. tall. Native to North America. Annual. 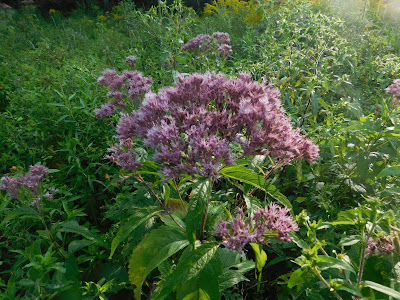 According to legend, Joe Pye was a Native American Indian who used this plant to cure typhus among the colonists. Likes to grow in damp meadows and thickets. Tall plants reach 4-7 ft. with fragrant purple flowers in late summer. Native to eastern North America. Perennial. 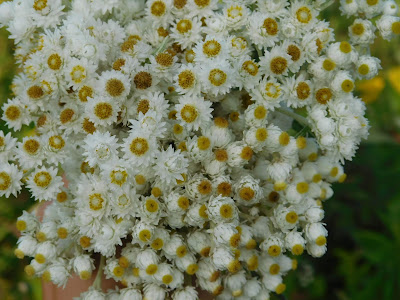 A lovely wildflower commonly found in fields and roadsides. The flowers are excellent for drying. The Canadian backwoods settlers used them to stuff pillows and mattresses. A host plant for the American Painted Lady butterfly. Grows 1-2 ft. tall. Native to North America and parts of Asia. Perennial. 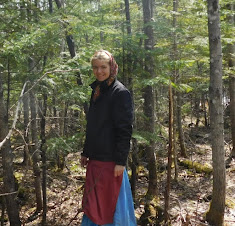